I enjoyed watching DEADPOOL, the latest superhero movie to come out of the Marvel movie universe.

To be honest, the endless stream of superhero movies coming out of Hollywood is getting a bit too much. Captain America: Civil War, Batman & Superman (don’t forget Wonder Woman), Ant Man, Doctor Strange, Aquaman, another Avengers movie coming up,which means maybe another possible film starring the Hulk, Thor, and Iron Man. And then there’s the X-Men Apocalypse…Xavier, excetera.

Deadpool tries very hard not to be a typical superhero movie, and despite showing the standard comic book fare with action scenes and bad CGI effects, it does go out of its’ way to portray its’superhero as anything but a superhero. He’s just a right pain in the butt.

Played by Ryan Reynolds – he channels his ‘Van Wilder Party Liaison’ character, but adds more foul language to his fun persona. As Wade Wilson -‘The Merc with the Mouth’ Reynolds is perfect in this role. I still can’t forgive him for what he did to ‘The Green Lantern’, but he really makes up for that tank with this film.

He’s irritating, rude, foul-mouthed and snarky, but at the same time wickedly funny.

It felt like I was watching a really fun B Movie with bad language, and A+ shock value. At times it wanted to reach the heights of the movie ‘Kick-Ass’ and it does come terribly close.

With a stunning opening credit sequence that’s played out to the classic 80s’ ballad ‘Angel Of The Morning’ by Juice Newton – mocking the whole idea of an opening credit sequence, breaking down the fourth wall so he talks to you on screen, and one hilarious scene that plays out like a great Monty Python sketch, Deadpool doesn’t just take the Superhero movie genre and turn it upside down, it pulls down its’ pants and pisses on it. And then spits it right back in its’ face – with sex, violence and the funniest profanity of language, which seem to ooze effortlessly out of Ryan Reynolds’ mouth.

In the movie, Deadpool says he doesn’t want to be a Superhero, and he damn well shouldn’t be.

He’s too much of a smart ass for that. 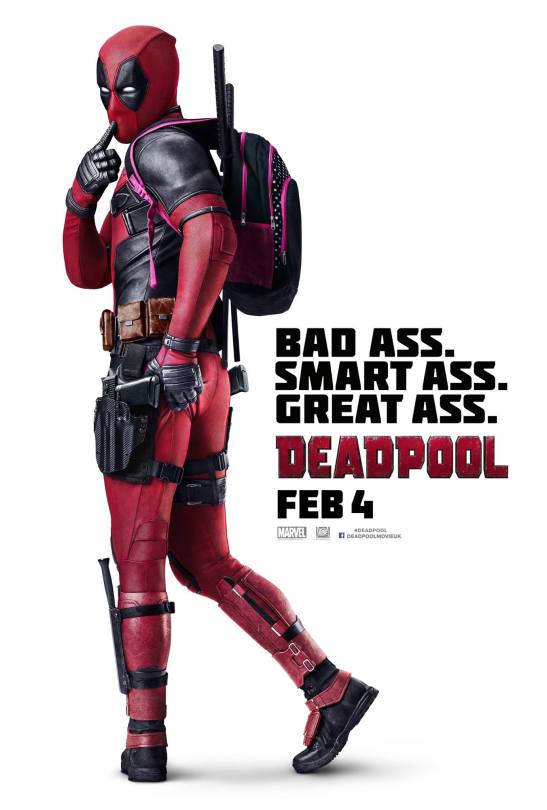